Marina Jijina is a British oil painter who has an academic background in art. Classically trained, artistic experiment and non-conformist approach to art have been at the core of her practice. Through her observations, research and studies she has become deeply fascinated by vulnerability of the human condition. In her artwork, derived from her original experiences as an artist and academic, Marina Jijina explores different aspects of the human condition by means of creating an infusion of cultural, temporal and visual associations. Sometimes she seeks to reinterpret past traditions, investigating the conflict between self and other in a collision between the ideal and the human.

Marina Jijina’s art work has been developing alongside her art related research. As the result, the artist’s body of work is in constant movement. Marina Jijina has exhibited since 1996 in Britain, France, Italy, Russia, Spain, the Netherlands, Macedonia, and U.S.A. The artist’s works can be found in private collections as far afield as The United Kingdom, France, Iceland, Russia, Italy, Spain, Sweden, Switzerland, Finland, and The United States. Two of her works are included in the art collection of the world famous artist-musician Brian Eno.

In 2016 Marina Jijina’s artwork Jamila won People’s Choice Award at Competition for the best illustration of Chinghiz Aitmatov’s work in London. In 2014 she was awarded World Citizen Artists Competition Winner for her oil painting Spanish Boy .

Between 2015-2019 Marina Jijina was represented by Cross Design Gallery, France. She has published scholarly articles in various academic journals, including  Studies in East European Thought, The European Journal of Psychotherapy and Counselling, The Oxford Philosopher, and The Lev Shestov Journal. She is a member of the Lev Shestov Studies Society and the Editorial Board of Cyclops Journal. In 2020 Marina Jijina completed her doctoral research project and successfully defended her PhD thesis, titled ‘Beyond Rational Consciousness: On Lev Shestov’s Angel of Death, Philosophical Revelation and Created Truth’. Her monograph, Lev Shestov’s Angel of Death: Memory, Trauma and Rebirth was published by Peter Lang in 2021. 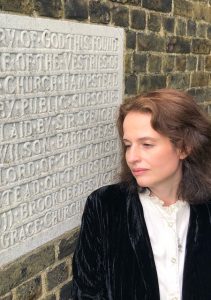